COLUMBUS, Ohio — The ACLU of Ohio and League of Women Voters of Ohio said they have seen enough to know how this legislative redistricting process is going to end up if they do not intervene.

Monday night, the groups filed a motion with the Ohio Supreme Court to make the members of the Ohio Redistricting Commission show why they should not be in contempt for failing to meet, draw and adopt new General Assembly maps.

What You Need To Know

The Ohio Supreme Court told the commission on April 14 to draw new Ohio House and Senate maps and turn them in by May 6. So far, the process has not started.

A three-judge federal court panel said if commissioners do not resolve the situation by May 28, it will implement the third set of maps adopted by the commission that the Ohio Supreme Court ruled unconstitutional.

On the one hand, that is considered a reward for the Republicans who drew and adopted the maps. On the other, Democrats and voting rights advocates view it as a punishment, despite their work to get a constitutional reform passed in 2015.

The voting rights groups want the independent map drawers, who took part in the fourth legislative process, rehired and for the commission to get to work.

“We think that since they have this tendency to run out the clock, that it was time to try to nudge this process along with a filing with the Ohio Supreme Court,” said Jen Miller, executive director of the League of Women Voters of Ohio.

Spectrum News 1 legal analyst Rory Riley-Topping echoed that if the court was to make a real push for maps it considers constitutional, the time is now.

“I think it’s time for the Ohio Supreme Court to put up or shut up when it comes to this contempt issue,” said Riley-Topping. “We’ve, again, had so many hearings, motions, all of this, if they’re serious about trying to impose any accountability on the commissioners for their lack of action and then blaming running out of time for the lack of action, the time for them to act on this is on this motion.”

Ohio Auditor Keith Faber sent a letter out Tuesday to the rest of his fellow commissioners to meet “as soon as possible.” 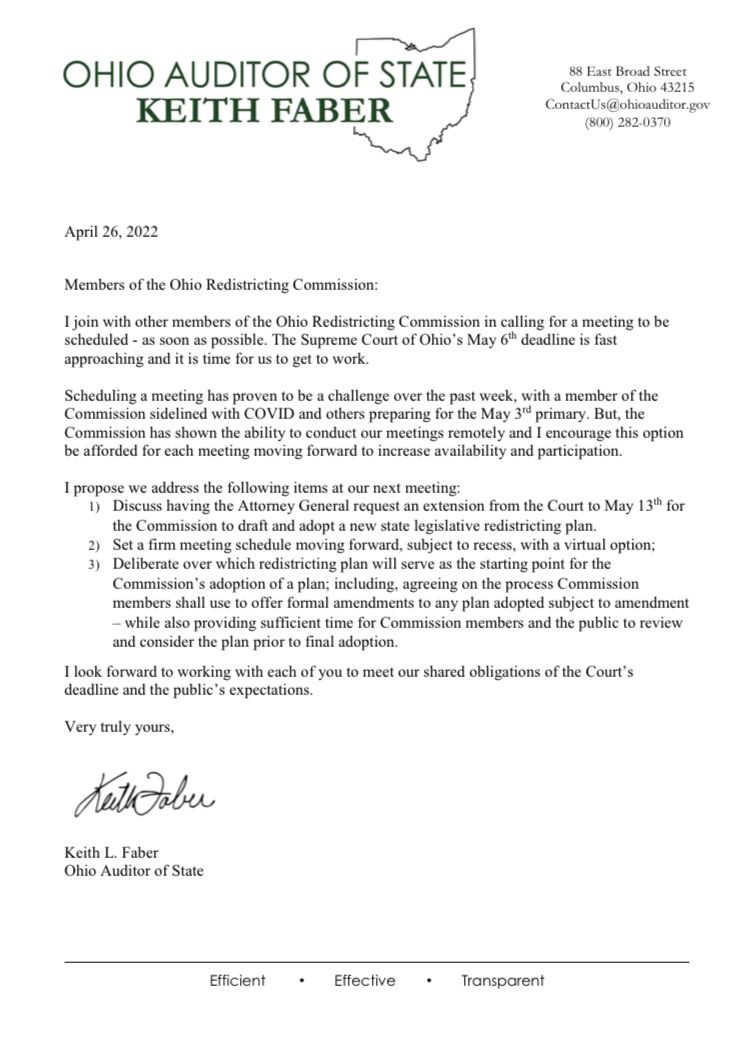 Faber said Attorney General Dave Yost should file for an extension with the Ohio Supreme Court for May 13.  The court has said no extensions will be granted.

National Democrats submitted evidence to the Ohio Supreme Court on Monday in the congressional redistricting lawsuit, claiming Republicans had been working behind the scenes to draw a map that favors them more than it should.

Thousands of pages of documents were submitted about several things, but the national Democrats presented emails between the Republican commissioners and map drawers, showing how they were discussing congressional map proposals internally before doing so publicly.

The texts show LaRose telling Gilbert in real time the differences between the 9th District near Toledo and the 13th. A spokesperson for LaRose did not comment about the texts citing ongoing litigation, but Gilbert ended up filing in the 13th two days after the map was adopted, after previously announcing in the 9th.​

The congressional map favors the GOP in at least 66% of the districts when they have only earned 54% of the statewide vote the last 10 years.

Miller again, a litigant in the congressional case, said this is not what nearly 75% of voters asked for in 2015. Riley-Topping said while the timing of the emails and messages are suspicious, they are not exactly a smoking gun.

“There’s probably a lot of other communications that took place beyond written means, such as emails and text messages. And they’ll get more into that when this litigation gets forward,” she said. “I think it certainly opens the doors to ask more questions. But at this point in time, I don’t think that there’s anything that’s been filed that really makes this a slam dunk for them.”

“It’s absolutely critical that we get to a process and a congressional map that truly is bipartisan and transparent,” said Miller. “And it’s not okay that candidates are possibly seeing the redistricting plan before even the commissioners or nonpartisan voter advocates.”

The congressional redistricting case will not be litigated until after the May 3 primary in which the controversial congressional map is being used.

May is Motorcycle Safety Awareness Month

The Ultimate Guide to Festivals in Columbus for 2022 –

Columbus Daily Times
Prev Next 1 of 667